The Trillium-II project (www.trillium2.eu), participated in the 5th European Union Module Exercise (EU MODEX-Ro) to evaluate the International Patient Summary (IPS) in the context of a disaster management and emergency response exercise. EU MODEX-Ro took place in sites around Bucharest on 14-18 October 2018, hosted by the Ministry of Internal Affairs of Romania. EU MODEX-Ro was the largest medical exercise in the history of the European Union with more than 3500 participants and by number of teams and participants it was the largest Medical Module Exercise within the framework of the Union Civil Protection Mechanism with participants from all member states, 600 role players and 2000 medical injects.

The EU MODEX-Ro exercise scenario involved a devastating earthquake of 7.5 Richter in Bucharest. Saturday morning at 8:37 o’clock Romania declared Status of Emergency and requested international assistance. At the request of the Romanian government, the EU responded by, amongst others, sending a large and highly skilled Emergency Medical Team (EMT), merging on the spot with an Israeli team.

Trillium II evaluated the use of the International Patient Summary (IPS) in the EMT-3 operations. An EMT-3 is a fully operational mobile field hospital. Trillium also solicited feedback from EMT-2 team members, which offers some but not all hospital departments.

The value of the IPS available in the smartphone of a victim, in the aftermath of a disaster was assessed at different levels of disaster management. The IPS comprises key elements of a person’s health profile as critical problems and conditions, allergies, medication, vaccinations, aiming to serve as a window to a person’s health prior to the disaster.

During the EMT-3 shifts on October 16, 2018, 20 earthquake victims (role players) arrived in groups with other medical cases to the mobile field hospital for treatment. The victims had the IPS on their mobile phones and showed it to the EMT team.

The visual presentation of specific medical case injects was assessed on three different apps developed by Gnomon (eHealthPass), SPMS (MySNS), and SRDC (Care Planner of the C3Cloud project) as well as in free text in discussions with the Italian, Austrian, and Israeli medical teams.

eHealthPass enables the patients to carry their medical information (medical record, vaccination list, prescriptions calendar, appointments with doctors, etc) on their smartphone and empowers them to gain control of their own data by determining who will have access to which piece of information. In the context of the Bucharest exercise, eHealthPass facilitated the demonstration of the IPS on the victims’ smartphones and additionally it incorporated the produced encounter report on the victims’ medical record.

MySNS developed by SPMS, Portugal allowed presentation of IPS related information in different Cards information on vaccinations, allergies, etc. and is available to all Portuguese citizens. The tab design appealed to the chief of the Italian EMT-2, who was kind to grand us an interview.

The SRDC adaptive care planner reads the IPS and can assist health professionals to formulate a care plan based on the most recent professional guidelines covering the care of patients already suffering from chronic diseases including diabetes, heart failure and renal failure. It is a technology to be tested in the C3Cloud project, that could appeal to social workers that dealt with earthquake victims in the period following the disaster, while still in the hospital or evacuation camp. The adaptive Care Planner also allows medical professionals to quickly review the medical summary of a patient by processing and visualizing the IPS. 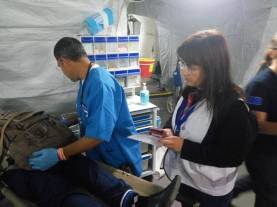 The HL7 FHIR IPS format used has been the result of collaboration between CEN and HL7 and provides a refined representation of the IPS used in the Connecting Europe Facility (CEF) eHealth Digital Services Infrastructure (eHDSI).

According to the original plan at the end the shift (s) when the exercise section medical cases had played out,  the Trillium-II team discussed the IPS experience (a) with the members of EMT about potential benefits and how the IPS affected their medical decision-making, care management, and patient safety and (b) with the role players (victims), about their patient experience of carrying the IPS on their smartphone or tablet.

Earthquake incident medical cases where evaluated both with and without IPS information. In this way, Trillium-II will assess the advantage of having an IPS or its parts e.g. medications, allergies, etc., in real emergency situations:

Several in depth interviews were carried out. They reflected the importance of keeping a photo in the patient summary as a means of identification and supporting the language of the country where the disaster occurs. They also illustrated the importance of the user interface design. Depending on the setting where information is used and the specific medical case, different elements of the IPS were considered of higher importance. Whereas, in the Emergency Room, physicians stated the medical background is of lesser importance, physicians at the field hospital’s Ward believed their work could benefit the most from the IPS.

Additionally, the type of the information carried out will be provided as part of the integration with the EUMFH Electronic Health Record system (EHR), IPS is imported to the EUMFH, in the HL7 FHIR IPS format, as part of a rewarding cooperation with the Leipzig University and the team of Prof. Thomas Neumuth. EUMFH is an EMT-3, which can provide long-term medical relief to the earthquake victims.  After treatment and discharge, the relevant information, that is procedures, medication, other medical actions, etc. will be available to the team accompanying the patient as an encounter report, which can also be imported to GNOMON’s eHealthPass Application. 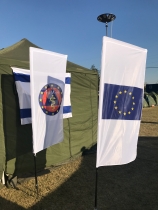 Initial efforts to assess the IPS concept in disaster medicine were positive and rewarding but leave a lot of questions unanswered. For example, can we use IPS information to assess the pharmaceutical needs of the evacuation camp? How would the IPS fit in a situation where an epidemic develops in an evacuation camp? Should we recommend different designs for the presentation of IPS information depending on the background and information needs of a health practitioner? Could care plans for chronic disease members be adapted to disaster situations?

What should be the guidance given to paramedics that see the smartphone of a victim in their pocket? Should IPS information be used to adjust 2nd level Triage protocols?

Trillium-II hopes to continue its collaboration with EU-MODEX to be able to further explore similar questions about the IPS in the next exercise organized in Estonia.